The Nigerian agencies- Chain Reactions Nigeria, TBWA Africa and The Temple Management Company, that jointly created the Nigeria @ 60 logo have refuted rumors making the rounds that the logo, which has been appreciated and loved by both highly placed government officials and industry practitioners was plagiarized.

The rebuttal came on the heels of rife rumors that have been on the social media that the logo was lifted from a Russian Diamond company.

According to a joint statement released to our reporter, the co-creators said, “The attention of Chain Reactions Nigeria, The Temple Management and TBWA Africa has been drawn to an unfortunate conversation in some sections of the online media regarding the recently unveiled logo for the Nigerian Diamond Jubilee Celebration (Nigeria at 60) by President Muhammadu Buhari (GCFR).

“Few hours after the unveiling of the Nigeria at 60 anniversary logo, myriads of reviews poured in from different stakeholders across the country as expected. As envisaged, the views expressed are symbolic of our diversity as a nation. In fact, it captures what we are celebrating. The theme of the Diamond Jubilee Anniversary, TOGETHER, is all about how we have stayed together as a people despite our diversity.”

The statement further said, “This isn’t surprising as major brands and government initiatives have undergone barrage of condemnations and commendations in times past. Are we surprised? No,” Mr. Israel Opayemi, chief executive officer of Chain Reactions Nigeria stated.

Opayemi reiterated that it is commendable that the Nigerian government has done the right thing by engaging the services of Nigerian professionals to develop the thematic direction, campaign strategy and the logo for the Diamond Jubilee celebration pro bono.

“In the past, you would have heard that the Nigerian government engaged the services of some foreign agencies for some nerve-cracking and ridiculous sum of money.” Opayemi emphasised.

On the plagiarism, the statement read, “The primary allegation of plagiarism on the unveiled logo deserves a quick dissection. To Plagiarise, according to Oxford Language Dictionary, is to take someone else’s work or ideas and pass them off as one’s own.”

Interestingly, the emptiness of this narrative lies in the fact that peddlers perhaps do not understand the meaning or they feigned ignorance so as to drive their usual hatred for the Nigerian government.

“To meet the qualified meaning of this definition, it means the Nigerian professionals who designed the campaign picked another logo that is exactly like this or similar to this and delivered it to the Federal government. Have they shown Nigerians the logo that looks exactly like the Nigeria @ 60 logo from another jurisdiction,” Opayemi asked rhetorically.

He said, instead of saying that the diamond looks similar to the one they have found on the internet, they have disingenuously alleged that Nigeria plagiarised her 60th Anniversary logo. What a convenient narrative but a disservice to our fatherland.

A quick check on the internet shows that there are thousands of diamonds with crystals that look alike. The images on the Internet are there in any way for creative usage and purposes. Some are backed by rights and paid for while others are free.

Reacting to the outrageous costing narrative being peddled about, the chief executive officer of Chain Reactions Nigeria stated that “Without an announced budget or costing being declared from the Presidency, some social media commentators have hastily concluded that the logo was designed with an outrageous amount.

According to him, “Should we put the perpetrators on a national media to justify this claim with verifiable evidence, we will be offered with silence and mischief. The Nigeria at 60 logo was designed pro-bono out of sheer zeal and patriotism for Nigeria by a consortium of Nigerian marketing communications and talent management companies.”

“This controversy is a great disservice to these Nigerian professionals who have invested their time into giving Nigeria a beautiful identity in commemoration of her 60th anniversary,” the statement concluded. 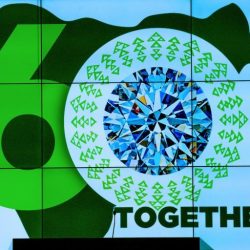 Jorotom, 2 other members dragged to court for defrauding Celestial Church millions of Naira