In the name of Allah, Most Gracious, Most Merciful. Praise be to Allah, the Cherisher and Sustainer of the worlds; Most Gracious, Most Merciful; Master of the Day of Judgment. Thee alone do we worship, and Thine aid we seek. Guide us in the right path. The path of those on whom Thou hast bestowed Thy Grace, Not the path of those who have gone astray (Qur’an 1: 1 – 7).

The Almighty Allah says in Holy Qur’an Taubah, 9:38-39, “O ye who believe! what Is the matter with you, That, when ye are asked to go forth in the Cause of God, Ye cling heavily to the earth? Do ye prefer the life of this world to the Hereafter? But little is the comfort of this life, as compared With the Hereafter. Unless ye go forth, He will punish you with a grievous penalty, and put others in your place; But Him ye would not harm in the least. For God Hath power over all things”.

From the foregoing, there are lot of benefits for those who fast on Arafat Day, 9th of the lunar month of Dhul-Hijjah, except those on Hajj rites. Prophet Muhammad SAW says, “If you are unable to fast for the whole ten days, try to fast on just the Day of ’Arafah, the 9th of Dhul Hijjah. Just as Laylatul Qadr is the most blessed night of the year, ‘Arafah is the most blessed day of the year. The Prophet (SAW) said, ’There is no day on which Allah frees more people from the Fire than on the day of ‘Arafah’ (Sahih Bukhari and Muslim). Like Laylatul Qadr, we should spend this day seeking forgiveness and availing ourselves of Allah’s incredible mercy. On this day, non-pilgrims have the opportunity to extinguish the sins of two years by fasting! The Prophet (SAW) said, ′It (fasting on the Day of ‘Arafah) expiates the sins of the past year and the coming year’ (Sahih Bukhari and Muslim).

Incredibly, the Arafat Day is the Day Almighty Allah completed the religion of Islam, during the last pilgrimage (Hajj) of Prophet Muhammad (SAW). The Holy Qur’an, Maida, 5:3, says, “Forbidden to you (for food) are: dead meat blood the flesh of swine and that on which hath been invoked the name of other than God that which hath been killed by strangling or by a violent blow or by a headlong fall or by being gored to death; that which hath been (partly) eaten by a wild animal; unless ye are able to slaughter it (in due form); that which is sacrificed on stone (altars); (forbidden) also is the division (of meat) by raffling with arrows: that is impiety. This day have those who reject faith given up all hope of your religion: yet fear them not but fear Me. This day have I perfected your religion for you completed my favor upon you and have chosen for you Islam as your religion. But if any forced by hunger with no inclination to transgression God is indeed Oft-Forgiving Most Merciful”.

Moreover, the month is a period of joy and victory for the Faithfuls in the Unity of Allah as the Almighty ransomed the life of Isma’il with a ram on the tenth day of Dhul-Hijjah, in the valley of Mina near Makkah. God Almighty assures in Holy Qur’an 22:34-38, “To every people did We Appoint rites (of sacrifice), That they might celebrate the name of God over the sustenance He gave them from animals (fit for food). But your God is One God: Submit then your wills to Him (In Islam): and give thou the good news to those Who humble themselves, — To those whose hearts, When God is mentioned, are filled with fear, who show patient perseverance Over their afflictions, keep up Regular prayer, and spend (In charity) out of what We have bestowed upon them. The sacrificial camels We have made for you as among the Symbols from God: in them is (much) Good for you: then pronounce the name of God over them as they line up (for sacrifice): When they are down on their sides (after slaughter), Eat ye thereof, and feed Such as (beg not but) Live in contentment, and such as beg with due humility: thus, have We made animals subject To you, that ye May be grateful. It is not their meat nor their blood, that reaches God: it is your piety That reaches Him: He Has thus made them subject to you, that ye may glorify God for His guidance to you: And proclaim the Good News To all who do right. Verily God will defend (From ill) those who believe: Verily, God loveth not Any that is a traitor to faith, or shows ingratitude”.

It is also a period symbolically connected with the rejection of evil in thought, word, and deed. When the pilgrims cast seven stones at the evil one at each of the three pillars of Aqabah in Mina near Makkah for three consecutive days (Tashriq) as done by Prophet Ibrahim, Hajar, and Isma’il, they are seeking the Guidance, Protection, and Blessings of Almighty Allah, against the evils of Satan. The Holy Qur’an affirms in Chapter 37:100-111, “O my Lord! grant me A righteous (son)!” So, We gave him the good news Of a boy ready To suffer and forbear. Then, when (the son) Reached (the age of) (Serious) work with him, He said: “O my son! I see in vision That I offer thee in sacrifice: Now see what is Thy view!” (The son) said: “O my father! Do As thou art commanded: Thou will find me, If God so wills one Practicing Patience and Constancy!” So, when they had both Submitted their wills (to God), And he had laid him Prostrate on his forehead (For sacrifice), We called out to him, “O Abraham! “Thou hast already fulfilled the vision!” —thus indeed Do We reward Those who do right.  For this was obviously A trial— And We ransomed him with a momentous sacrifice: And We left (this blessing) For him among generations (To come) in later times: “Peace and salutation To Abraham!”  Thus, indeed do We reward Those who do right. For he was one Of Our believing Servants”.

What of the virtues of patience and perseverance in faith which the two symbolic monuments of Safa and Marwah in Makkah exhibit in this month of Dhul-Hijjah? At least the prayer of the bosom wife of Prophet Ibrahim (AS), Princess Hajar, mother of the infant Isma’il was answered in her eager quest round the hills for water in the perched desert when Zam-Zam spring gushed out from the feet of Ismail, since then to provide comfort. Thus, pilgrims on ‘Umra and Hajj re-enact the episode through juggling up and down the two hills of Safar and Marwah (Sa’i1) seven times to seek for Allah’s immediate answer to their prayers as did for mother and child in the ancient days of the month of Dhul-Hijjah. The Holy Qur’an 2:158 says, “Behold! Safa and Marwa are among the Symbols of God. So, if those who visit the house in the season or at other times should compass them round it is no sin in them. And if anyone obeyeth his own impulse to good be sure that God, is He Who recogniseth and knoweth”.

The Hadith on the Zam-Zam water that gushes out from the feet of Prophet Ismail says, Muslims use Zamzam water to recover from diseases, according to the speech of the Prophet Muhammad, peace be upon him, who said: “Water of Zamzam is good for whatever (purpose) it has been drank.” In another Hadith, the Prophet said: “Water of Zamzam is a healer of every disease” (Sahih Bukhari). It was reported in Sahih Muslim that the Prophet, sallallahu ‘alayhi wa sallam, said to Abu Dharr, who had stayed near the Ka’bah and its coverings for forty days and nights with no food or drink other than (Zamzam), “How long have you been here?” Abu Dharr said, “I have been here for thirty days and nights.” The Prophet, sallallahu ‘alayhi wa sallam, said, “Who has been feeding you?” He said, “I have had nothing but Zamzam water, and I have gotten so fat that I have folds of fat on my stomach. I do not feel any of the tiredness or weakness of hunger and I have not become thin.” The Prophet, sallallahu ‘alayhi wa sallam, said, “Verily, it is blessed, it is food that nourishes.” [Narrated by Imam Muslim, 2473]

The first House of Allah (Ka’ba) was built by Prophet Ibrahim and his son, Isma’il in this unique month of Dhul-Hijjah (Q. 2: 125). And the duo were the first pilgrims to compass it (Tawaf), prayer in retreat (I’tikaf), bow down (ruku) and prostrate (sujud) in total submission to Allah before proclaiming on mankind to observe same annually. It is thus, a place for prayers that is secured from all attacks. The Holy Qur’an 2:125-127 attests that, “Remember We made the house a place of assembly for men and a place of safety; and take ye the station of Abraham as a place of prayer; and We covenanted with Abraham and Isma`il that they should sanctify My House for those who compass it round or use it as a retreat or bow or prostrate themselves (therein in prayer). And remember Abraham said: “My Lord make this a City of Peace and feed its people with fruits such of them as believe in God and the Last Day.” He said: “(Yea) and such as reject faith for a while will I grant them their pleasure but will soon drive them to the torment of fire an evil destination (indeed)!” And remember Abraham and Isma`il raised the foundations of the House (with this prayer): “Our Lord! accept (this service) from us for thou art the All-Hearing the All-Knowing”. May Almighty Allah accept our acts of worship (‘ibadah) in the lunar month of Dhul-Hijjah. Ameen.

Write Prof Osho to give you more insight to this topic. Subscribe for free to patmosmedialine.com.ng to get his sermons direct in your mail. Do not forget to share this. 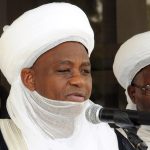