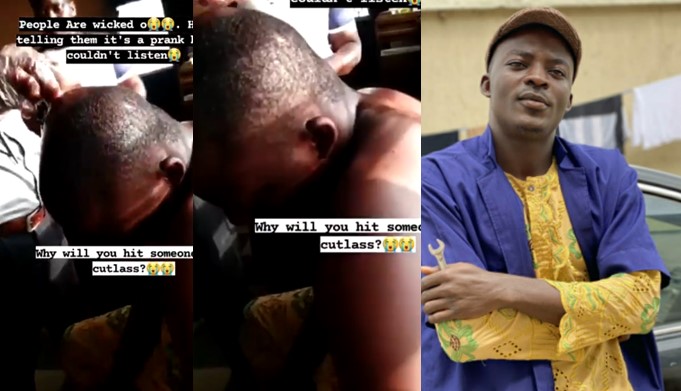 A skit maker escaped death in a whisker as he was mobbed in Ibadan, Oyo state after pretending to be a ritualist for a comedy shoot.

The comedian named MC Freedom shared footage from the skit-gone-wrong that left him with a bleeding skull.

In the video, Freedom had visited a local marketplace in Ibadan clad in a red shirt beaded with fetish cowry shells.

He then accosted his co-actor, a lady who pretends to buy food items from the stall of an elderly Yoruba woman.

Freedom makes it known openly to the vendor that he needed a virgin for ritual at the request of his spiritualist.

He argues that he really needed the lady who was the vendor’s customer while challenging the vendor for standing in his way.

As the young lady edges away from Freedom to seek safety in the vendor’s shop, the old woman then raised an alarm. 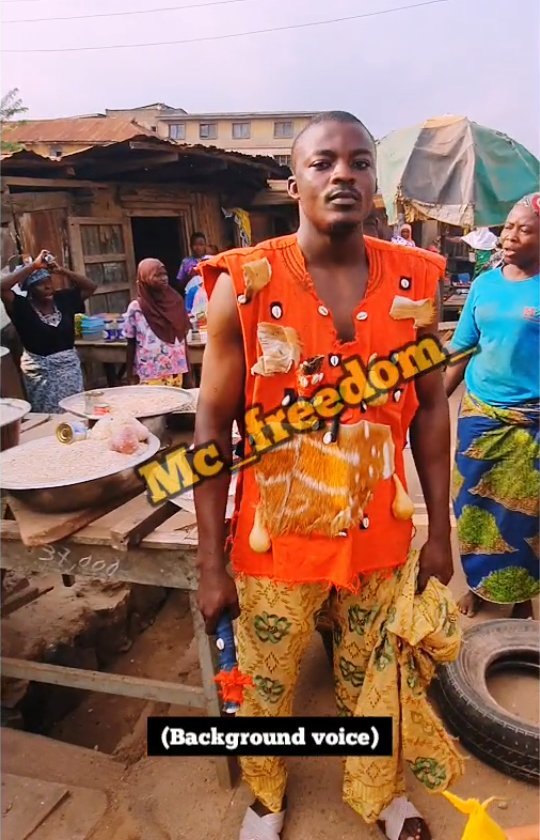 In no time, locals moved to intervene but the skit maker pulled out a fetish item and started uttering incantations, daring them to approach him. He proceeded to point the fetish item at the purported victim, summoning her forward.

As the lady pretends to have become hypnotised, she moved towards Freedom but locals attempted to resuscitate her by bathing her face with water. Out of rage, they also pounced on Freedom who then opens up that it’s only a skit.

Despite confessing that it’s only a skit, the observers stoned the skit maker while others wielded matches and sticks.

This gave way to another shot wherein Freedom is seen with bruises, a partly shaved head, and a bleeding skull.

Posting the video, the skit maker wrote in the caption: “The Virgin Prank. The prank that almost got me killed. What I observed in this PRANK is just love. I see a lot of people trying to protect the girl.”