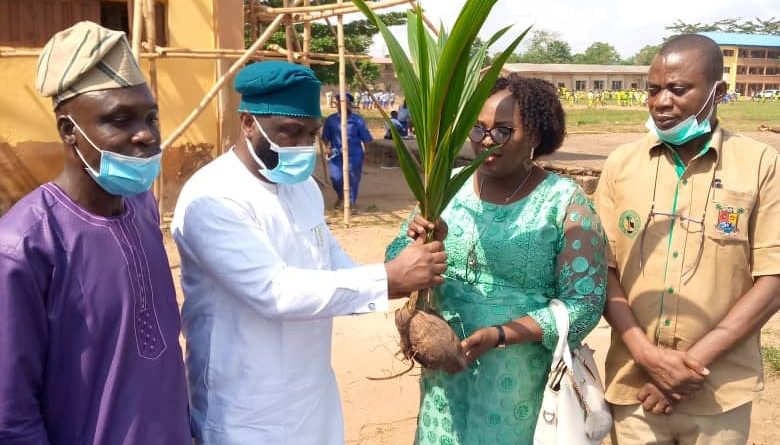 In fulfilment of its promise to support both private and public institutions through the Coconut Renewal Initiative of the State Government, the Lagos State Coconut Development Authority (LASCODA) has presented improved and urban-friendly Coconut Seedlings for the beautification of Dairy Farm Secondary School, Agege and Anwar-Ul-Islam Model College, Agege.

Speaking during the presentation and the symbolic planting of the seedlings at the two Secondary Schools, the Senior Special Assistant to the Governor on Agriculture, Mr. Gbolabo Olaniwun, stated that the gesture was in line with the State Government’s initiative on Coconut.

He emphasised that the initiative was designed to make coconut a household tree whereby people would understand the economic benefits of the crop, stressing that there are currently about 2.5 million coconut trees in the urban areas and the plan is to increase it to three million by the end of 2020.

“We intend to propagate the importance of coconut among the general public, including public institutions and the private sector, as well as promote its prominence as a cultural heritage and staple food to Lagos indigenes”, the Olaniwun added.

On her part, Mrs. Titilayo Margaret Solarin, the Tutor-General/Permanent Secretary, Education District 1, Agege, represented by Mrs. Moriyeba Bello, appreciated the Governor for his kind gesture to have approved their request for the seedlings.

She said the planting of the coconut seedling will enhance the beautification projects of the schools, promising that she will ensure that the seedlings are properly nurtured and taken care of by the schools.

Making his remarks. the General Manager 0f Lagos State Coconut Development Authority, Mr. Oladapo Olakulehin, stated that the presentation of the seedlings to the schools was in continuation of the coconut renewal initiative of the Lagos State Government.

According to him, “The exercise is meant to promote coconut development activities in Lagos State, through the distribution of the coconut seedlings to various institutions, so as to increase awareness on the array of invaluable economic, health and environmental benefits that coconut offers amid many of its other social benefits”.