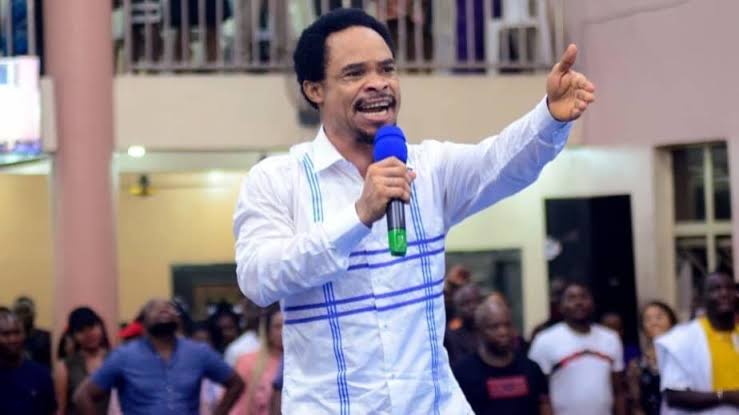 A controversial Onitsha-based clergyman, Chukwuemeka Ohanaemere, better known as Prophet Odumeje, has vowed to deal with persons accusing him of staging fake miracles in his church.

In an Instagram video shared by Rita Edochie, Nigerian actress, on Saturday, the clergyman threatened to take severe spiritual measures against his critics.

“And all of you that speak what you don’t know about the families of Lion, and about me, I will settle you,” he said angrily.

“Your mission is to begin to criticise and speak against the Lord Almighty, you can’t stop a moving train.

“No human being gave me power, and my power is not from an idol, and I have never knelt down before any man of God or before any shrine or anyone, and say ‘pray and lay hands on me.’

“I was anointed from above. I have never done fake miracles, I have never packaged fake miracles with anyone. If you know that you gave fake testimony, and I paid you to give that testimony before this altar, provide yourself on Facebook. And you that said it when I am done with you, with what my father tells me, I will begin small for your generation.

“And no one stop me when I begin a fight. If you want to joke, joke with the people around you, don’t joke with a man you don’t know how he begins, and that is Lion for you.”

Odumeje’s outburst comes a few days after the death of Ada Jesus. The comedienne breathed her last on Wednesday at an Abuja-based hospital after a protracted battle with kidney disease.

In 2020, Ada Jesus had accused Edochie of conniving with Odumeje to stage fake miracles.

It was gathered that not long after the entertainer’s allegations, she took ill and later became paralysed.

How to Handle Cheating Husbands: Edochie Advises Women, ‘Put Condom in His Bag’

Beheaded Adamawa Pastor: CAN Got It Mixed Up -Femi Adesina