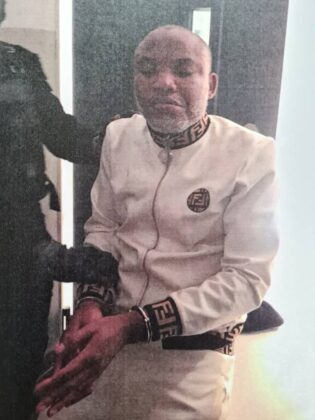 Justice Binta Nyako of the Federal High Court, Abuja has remanded the leader of the proscribed Indigenous People of Biafra (IPOB), Nnamdi Kanu in the custody of the Department of State Service (DSS).

Justice Nyako made the ruling on Tuesday when Kanu was presented in the court for the continuation of his trial.

It was learnt that Kanu was not represented in court, prompting the judge to order the DSS to inform his lawyers as the case was adjourned to July 26 for continuation.

Kanu founded IPOB in 2014. The main aim of IPOB is to create an independent state for the people of old Eastern Region of Nigeria.

The group has been blamed for recent attacks on security operatives in the South East.

It was learnt that he was arrested and extradited to Nigeria on Sunday.

The Attorney-General of the Federation, Abubakar Malami, SAN, revealed that Kanu was arrested and brought back to Nigeria on Sunday.

He said the arrest followed a collaborative effort between security agencies in Nigeria and the Interpol.

Kanu began his activism for the freedom of Biafra as a Radio Biafra director and anchor of Biafra awareness under Ralph Uwazuruike, leader of the Movement for the Actualisation of Sovereign State of Biafra (MASSOB), who said while in a meeting in Kaduna, Nigeria on June 12, 2014, that he handed over Radio Biafra to Nnamdi Kanu, leader of IPOB but Kanu disappointed him.

Kanu was arrested on treason charges in Lagos on 14 October 2015 but was granted bail in 2017.

However, Kanu disappeared from public view after his home was raided by the Nigerian military, in September 2017, an event which led to the deaths of 28 IPOB members. 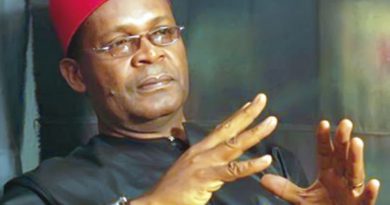